Frankly Not About Food Forests

Food access is a serious problem for most communities of color and low-income communities in the majority of metropolitan cities in the U.S. The Detroit Food Justice Task Force describes “access” as: “the availability of quality food within a reasonable distance from where people live.  It also includes the ease and ability to travel to where quality food is available, as well as the affordability of that food and its cultural suitability to specific population groups within the community.” Most major cities like Oakland, Los Angeles, Detroit, Chicago, D.C. and New York City are dealing with what some people have begun to call food apartheid — that visible food gap prevalent between predominantly white and  predominantly black/brown parts of town due to historical and structural discrimination. Namely racism.

You’ve seen this, I’m sure. Certain parts of town have lots of liquor stores, fast food chains, convenience stores with high prices and grocery stores with expired food on the shelves. Or perhaps there are no grocery stores at all. It’s so magical how when white folks begin to move into certain parts of town, more grocery stores, farmer’s markets and food hubs with healthy food options pop up because they want them. And this is awesome because these neighborhoods hadn’t needed these before. No, not at all. And please be comforted that it’s completely not a reflection of the value placed on former, more established residents versus new residents. It just happens to be that new businesses get funded after old businesses shut down and the “hood” becomes an “oasis” — well, for some.

A food forest is the “newest” pseudo-solution to limited food access. Actually, I’d venture to say that they are actually a front for a solution and a harbinger for additional development and an added “cool,” “trendy” and “enticing” factor for both tourists and wealthier residents.

These food forests, also called forest gardens, are one of the oldest forms of land use in the homelands of our Black and Brown ancestors. They can be found in Kerala, Sri Lanka, Nepal, Indonesia, Zambia, Zimbabwe, Ethiopia, Tanzania, Mexico, and many more. But you can bet that you won’t hear much about these origins. You’ll hear about a white guy in the 60s from England. In the past few years, these food forests have become the latest craze with hipsters, hippies, and their do-gooder, back-to-the land-er allies and all in the name of “urban agriculture,” the growing of fruits, vegetables and herbs and the raising of animals in cities.

These food forests are generally cultivated on public land, like city parks, and allow for a variety of edible plants, herbs, vegetables and fruit to be grown together for maximum production. The idea is that they will sustain themselves with little to no upkeep, much like a forest, and will provide additional access to food for the community. 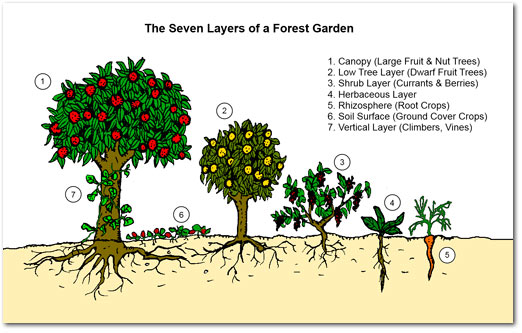 The concept is rooted in the permaculture movement, which largely consists of white folks with resources, privilege, and above all else, influence and access. They are especially concerned with “sustainability” — except for when it comes to the neighborhoods many of them are displacing, the overdevelopment they are contributing to, and the increased police surveillance, discrimination and brutality that accompanies these “revitalization” projects.

According to these (sometimes) affluent and privileged (but “liberal”!)  white folks, food forests are a really cool way to help low-income (and food insecure) communities experiencing rampant urban blight by teaching them to fish instead of catching the fish for them. Kind of. Well, the actual community experiencing food insecurity isn’t usually involved with planning or making these sustainable forests, so I guess what’s really happening is that the actual planners are casting the net out over the fish and then having people pull the fish in for themselves. I sure hope they like whatever’s in the net! It is important to note that the majority of people who gather food at these forests will probably not be the ones who can’t afford it. But you’ve probably figured that out already just from common sense. 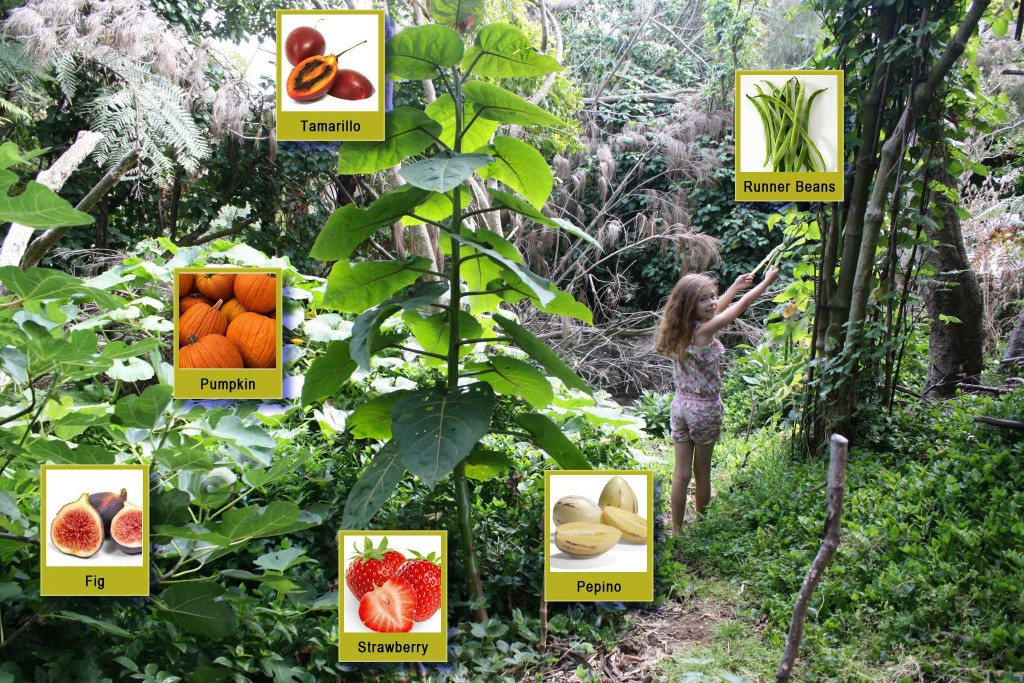 Basically, when city officials get behind these kinds of projects, it seems like it’s just another way to avoid dealing with pesky, systemic things like structural racism and its place in land loss, food insecurity and health disparities. “Let ‘em pick their own food in public parks! Don’t say we never gave them anything. Now let’s cut food stamps another 50%.”

1) You land grab for centuries, essentially taking away POC’s land/farms.

2) You fail to acknowledge the barriers for them to grow their own food due to economic and racial injustice and essentially lack of resources. (Yea, they don’t have the time or money to be part of your community garden because they’re trying to survive!)

b) They are waitlisted for said garden because of all the white folks who have moved to these places recently and either started the garden or were dyiiiing to be part of it.

3) You redline their communities so it’s easier for fast food franchises and expensive convenient stores and, what I like to call, gentrifiers’ “high end (community–*chuckle) convenience stores” to set up shop.

After this, then you say…”Oh hey! We’re going to totz grow some herbs and fruit trees and all these veggies that you don’t want that aren’t culturally relevant and stuff and you can totally drive to it all at your inconvenience to forage!

How will they know what’s ripe? Oh, there will be some signage: ‘Hey! Sorry you wasted your time. Come back next month. Oh, you’re hungry? Here, eat some fennel.’

But anyways, it’ll be fun! It’s cool…your ancestors used to do it! Don’t you see we’re doing this for you? Don’t be ungrateful! Don’t be divisive!”

No, I’m sorry…I just can’t get on board.

But hey, I’ve got an idea…howzabout you put all that money you’d use for this forest business into the countless number of POC-led food “projects” and efforts that have been going on since — ohhhh… RECONSTRUCTION—

And um…give people their land back. And while you’re at it…their knowledge, too.

My bad. I thought you were “liberal” and “progressive.”

I’m just sayin’. I thought you were an “ally”  to our community. I thought you wanted “food justice” and “change” but I forgot that that doesn’t necessarily entail “sovereignty.” No, not really. We can’t be allowed to create our own solutions and do for ourselves. You still need to be a savior, right? And get some Team Privilege street cred. Right?

I know I’m supposed to be thanking you or something, you know, for your solving this food access issue for me and my people but er uh…

I think we all know what community your forest is for and what it’s about.

I mean, you weren’t thinking of food forests a few decades ago. People were still starving albeit less displaced. You weren’t screaming about revitalization and development projects then. Maybe there should have been a food forest installed in 1928 when all the black and brown people in Austin were relocated to the east side and I35 was used as a physical barrier to keep them “in their place.” I’m sure they could have used it then. (This residential segregation and racial zoning and “redlining” happened/happens in cities all over the nation, not just the South.)

Or maybe when white farmers and the KKK were threatening black farmers because of competition and were steadily asking policymakers to figure out ways to make it difficult for them to thrive. I’m sure black farmers would have appreciated a food forest then…or maybe even now as they fight with the government for the money owed them due to decades of rampant discrimination. Maybe brown farmers and migrant farmworkers, and heck, those who have been here for centuries, would like a food forest, too. I’m sure it’d make up for the dispossession of land, discrimination and exploitation they’ve suffered over the years. Ask ‘em or perhaps ask their descendants. Oh what’s that? You can’t find any black or brown farmers or their descendants? Whoops. Maybe it has to do with that pesky “g” word that you have absolutely nothing to do with…gentrification.

Oh, gentrification is inevitable  you say? Just be happy with the food forest, you say. Shuck and jive and keep it movin’. OK. But listen, don’t say you speak for me or my community when you haven’t even thought once about our agrarian knowledge and history or who you are uprooting and replacing. Don’t say you know what we need when you only ask figureheads and tokens. That is, if you ask anyone at all. And don’t say we’re ungrateful when you have no idea what suffering you are perpetuating under the guise of “justice” and “improvement.”

But hey, thanks for listening. Hello? Wait — was this thing even on?

This writer received an honorarium for their work. SUPPORT BGD’s writers and help amplify the voices of marginalized people!

Toi is a visionary, community organizer, artivist, medicine maker/herbalist and ordinary superhero working toward racial and gender justice and the eradication of oppression and disparities within the economic, food, and health system. They are the author of Notes from an Afro-Genderqueer volumes 1 and 2 and radical, brown, gender/queer plays Genderqueer Files:La Qolectiv@ and Resistencia: Sangre. See more from them at philosophactivist.blogspot.com , queerherbalism.blogspot.com, and www.afrogenderqueer.com.

All work published on BGD is the intellectual property of its writers. Please do not republish anything from this site without express written permission from BGD. For more info, go here.

Get BGD creator Mia McKenzie’s debut literary novel, The Summer We Got Free. It’s the winner of the Lambda Literary Award.

What the conservatives are saying…in case you wanted to know

Removing the Poor through Land Use and Planning

Gentrification an East Side Story

Why the ‘teaching a man to fish’ parable is a lie

Unfit For Product Placement: Radicalizing the Cartoon Characters Of Our Childhoods

#FemCrowdFund Is An Intersectional Approach To Resisting Trump

The BGD Podcast 3.2.17: Save Ben Carson From the Sunken Place!

The Women’s March and the Difference Between Unity and Solidarity

The Misappropriation of MLK: Respectability Politics and Black Struggle

How To Create Change By Rejecting Intoxication Culture

White-ish Christmas. Or, Dealing With My Non-Black In-Laws

Live Your Authentic Self And Be Free: BGD’s Crush of the Month Featuring CeCe McDonald

The BGD Blog still needs your donations for ongoing projects and to keep our archives free and accessible for years to come! Click DONATE or go here for more info!

Kick It With Us On SM