Why I’m Voting Green As A Working-Class, Black, Queer Woman

Liberal social media intelligentsia assure me that a third-party vote is a vote for Donald Trump, but I say a vote for Hillary Clinton is a vote cast in the name of fear. As a working-class, Black, queer woman, I have little to gain by voting for an imperialist white feminist whose feminism does not include or reflect me.

Whether I voted for Trump or Clinton, I would still be putting a sexual predator in the White House. Why are we all ignoring the international liability that is Bill Clinton? Embracing Bill as “First Gentleman” is a slap in the face to sexual violence survivors and to communities who suffered during his presidency, such as the Black and Brown families devastated by mass incarceration and unjust welfare reform in the 90s.

Despite all of this, many of my progressive-leaning peers and family members are voting for Hillary to continue her husband’s neoliberal exploits, and they are not alone. Currently, Hillary has an 73.8 percent chance of winning the election and, being from Georgia, I am shocked that my home state could turn blue this election, along with the never-liberal state of Texas (is this real life?!). Prominent Republicans like Gen. Colin Powell are publicly endorsing her. Unless a lot of sketchy business goes down at the polls on November 8th (looking at you, Florida), Hillary will be our next president. I never guessed the election of the United States’ first woman president would feel like the apocalypse.

BGD is a reader-funded non-profit.

GIVE BACK and help amplify marginalized voices.

This election cycle has been terrifying to watch. I have been subjected to the word “pussy” one too many times and have nothing to show for it. While many voters believe they are facing two hopeless options, I have found a way to keep hope alive in 2016. I am voting in honor of my ancestors who did not have this right, undocumented friends, disenfranchised people with felonies, and others who cannot access voting. My vote is for the Green Party candidates, Dr. Jill Stein for president and Ajamu Baraka for vice-president. If you are not afraid, you should vote for them, too. Stein also ran in 2012, so hopefully she will create space for new, more diverse candidates in 2020. Her running mate Baraka is a Black international human rights activist who is an advocate for prison abolition.

The Green Party candidates are running on the same platform as in 2012, a plan called the Green New Deal. This plan has the potential to transform my life. If enacted, I would receive reparations as a descendant of slaves; when unemployed, I could go to an “employment office” that would hire me for a public green job that pays a living wage; I could access more funding for the queer women of color worker-owned cooperative I am a part of; me and my wife’s student debt would be abolished, resulting in better credit scores and allowing us to finally buy a tiny house; and my wife and I could pursue self-employment without worrying about health insurance because we would be covered by Medicare for All.

I feel at peace knowing that I am voting to fund education instead of wars. A Stein-Baraka presidency would halt the Dakota Access Pipeline from poisoning Indigenous land and water and stop the Trans-Pacific Partnership agreement from exploiting workers around the world. Of course, no candidate or political party is perfect. A well-to-do white lady (Stein) can only be but so anti-racist and a cisgender straight Black man (Baraka) will sometimes make patriarchal blunders (like coming for Queen Bey’s Black feminism). Their campaign is mostly white-led and instead of calling for an eventual end to the prison industrial complex, the Green New Deal recommends community control of police, police review boards, and police demilitarization.

Looking past the Green Party’s weak spots, at least I know I am voting in my own interests and the interests of my communities.

I know that if the Greens receive at least five percent of the vote, they will receive $10 million in public funding for the 2020 presidential race via federal matching funds. This may not mean much to the Democrats, who raised over a billion dollars in 2012, but it could open up a whole new world for the Greens, who refuse to accept corporate donations and raised only $894,000 in 2012. My vote will also help the Greens gain access to more state ballots—several states make third parties jump through hoops to be included on the presidential ballot. Unfortunately, you cannot vote for Stein-Baraka if you live in Nevada, Oklahoma, or South Dakota. In Georgia, Indiana, and N.C., you will need to write their names in.

I cannot be “woke” if I vote for empire. I cannot be an intersectional feminist if I vote for a white woman who took away support for struggling mothers of color. Be fearless with your vote. Liberate your presidential vote this year by voting Stein-Baraka and asking like-minded friends to do the same. Then, do what you can in the next four years to ensure we never have another election cycle as shitty and exhausting as this one. Form political organizations or join already existing ones that represent your values. Always speak out about injustices in your life because, as Audre Lorde said, you will still be afraid if you do not speak, so it is better to speak.

Neesha (she/her, they/them/their) is a Black queer femme writer, dancer, and community organizer originally from the South, currently living in the Pacific Northwest. She enjoys creating, laughing, and traveling with chosen family, her partner, and their cat, Seven. Tweet with her @womanistbae.

Do not republish anything from this site without expressed written permission from BGD. For more info, go here. 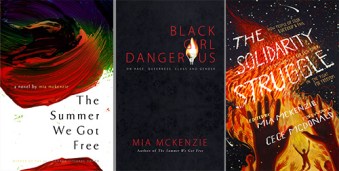 After The Raid: Why You Shouldn’t Look Away From #NoDAPL

Spirit Medicine: Day of the Dead and Celebrating Those We’ve Lost With Ritual (Ep. 3)

The BGD Blog Is Ending

The Women’s March and the Difference Between Unity and Solidarity

The Misappropriation of MLK: Respectability Politics and Black Struggle

How To Deal (Or Not) With Your Problematic Relatives This Thanksgiving

After The Raid: Why You Shouldn’t Look Away From #NoDAPL

The BGD Blog still needs your donations for ongoing projects and to keep our archives free and accessible for years to come! Click DONATE or go here for more info!

Kick It With Us On SM